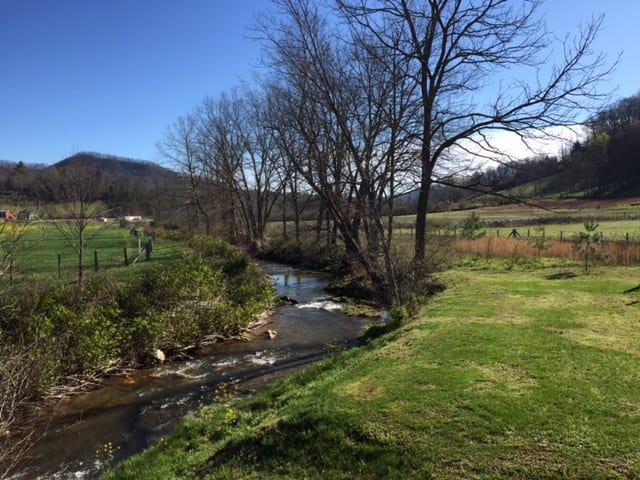 Riparian boundaries are designated setbacks between cultivated fields and streams, vegetative buffers which provide wildlife habitat and improve water quality.  An effective boundary along Sandy Mush Creek, for instance, would have a fence line a minimum of 40 feet from the bank, on both sides.  More distance is better.  This allows space for planting native trees, shrubs and grasses to enhance what’s already there.  By selecting trees to be planted, one can better control species types, genetic quality and spacing.  Ideally, a buffer between stream and field forms a somewhat tiered arrangement, with trees along the banks, then shrubs giving way to native grasses and forbs abutting the fence.

Of course, nature does not always neatly conform to our plans and sometimes our influence and informed decision-making is proper intervention.  The less labor intensive approach of letting plant succession run its course will result in a random understory of weeds, wildflowers, impenetrable vines and brambles beneath volunteer shrubs and trees.  Under some circumstances this “fence and forget” approach works out fine and is certainly better than no buffer at all.  In Sandy Mush (and elsewhere locally), however, leaving things totally to chance may accelerate intrusion of invasives such Multiflora Rose, Oriental Bittersweet, Japanese Knotweed, Chinese Privet and clusters of less desirable pioneer hardwoods like Box Elder and Black Locust.

Alternatively, one could opt to plant commercially viable species such as hybrid nut trees or hazelnuts, both of which tend to do well in the sandy and silty riparian soils.  This might eventually generate an income stream to offset the economic loss from agricultural land removed from production.  At least the local squirrels will be forever indebted.  Regardless of approach, fencing back from the bank keeps livestock out of the stream, allows trees to help maintain cool water temperatures, creates a subterranean maze barrier of roots to intercept field runoff, reducing sediment, nutrient and pesticide contaminants and stabilizing shorelines, minimizing erosion during high water.

A nine-year, University of Georgia study of fertilizer runoff demonstrated that riparian boundaries reduce watershed nitrogen by 60 percent and phosphorus by 65 percent, with low vegetation in the first line of defense being the most effective filters.  Meanwhile, emerging young growth offers food and cover for numerous birds and small mammals and also contributes to aquatic diversity.  The good news for land owners is that, once established, most riparian boundaries generally require minimal maintenance.  Five years into the experience, in addition to noticeable increases in small mammal and bird populations along the stream borders, we have also found that deer, bear and bobcat now use our riparian area as safe transit lanes.  A related subject for another day is drainage ditch management, principles of which have considerable overlap with riparian corridors.  It is likewise an often neglected nook where land owners can have a positive impact on biodiversity.

Given the benefits of riparian buffers, it may be surprising that this is not an automatic easy sell.  The reasons include the usual: tradition, habit and druthers.  There are an inevitable few who favor a manicured look, cannot resist mowing to the water’s edge and are unfazed by resulting environmental sterility.  For them, tidiness eclipses other considerations.  In agricultural situations, crops are often planted to the stream bank, to maximize yield and because “that’s the way we’ve always done it.”

Many contend that poor riparian zone management combined with recent trends away from crop diversification, introduction of certain genetically modified plants such as Round-Up Ready Corn which encourage herbicide use and crops like tomatoes requiring heavy fungicide and pesticide applications as well as extensive use of non-biodegradable plastics, explains declines in certain wildlife species, including essential pollinators.

When profits are in the balance, entrenched agricultural practices not only die hard, but can become obstacles to conservation initiatives.  Calculating the cost of taking land for a natural boundary out of crop or livestock production is simple math.  The rub comes in trying to gauge the economic worth of what is received in return.  To attach a dollar amount on a healthier ecosystem is harder to quantify and more subjective, hence less well understood.  Benefits of increased bird populations, improved small game habitat, fish in the stream, plum thickets and pastoral vistas are often ignored or taken for granted.

To the dairyman operating on tight margins and facing the loss of several hundred tons of silage, or for a cattleman considering the expense of installing additional waterers if his livestock were to no longer have free access to the creek, reluctance is understandable.  Government incentives and payments intended to allay these concerns remain necessary incentives to fairly compensate and motivate a change of habit.  In the end, however, the decision to sign up to a riparian boundary comes down to a knowledge and appreciation for the land and personal commitment beyond the here and now, in balance with financial realities.  We are fortunate to have professionals in our county soil and water conservation districts and agricultural extension services with expertise to assist.

Hesitancy over riparian boundaries will only end as environmental education gains more traction, we learn to respect downstream neighbors, the value of small farms, locally grown products and sustainable agriculture is more widely recognized.  To get there, conservation proponents must be able to make a convincing case for the economic advantages of mountain vistas, biodiversity and reduced pollution.  Then, living in harmony with the land will become a preferred choice and, perhaps, the Whip-poor-will returns to Summer evenings and the Hellbender, to Sandy Mush Creek.  That cannot happen soon enough.